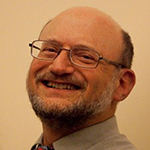 Cliff Meyer is Chief Caffeinator at Coffee Stain Communications, specializing in grantwriting, communications and strategic planning for human service and arts organizations. He has been on communications or development staff at the University of Washington, Seattle Repertory Theatre, Richard Hugo House and other institutions.

For PSGA, Cliff was a member of the Annual Conference Committee for all but one year since 2008 and was Co-Chair in 2014-2016. In 2017 he led development of a new event, PSGA Panorama. Cliff joined the PSGA Board in 2014, and served as President from 2018-2022. He is also on the Board of the PTA at his daughter’s high school. Other previous Boards include Child Care Aware of WA, Seattle Central Little League and the Program for Early Parent Support (PEPS), for which he also has been a parent-group volunteer leader. Cliff grew up in NYC, earned a BA in 1982 at Wesleyan University, then edited and reported at daily newspapers until 1993, when he moved to Seattle to earn an MPA at UW. He relishes being an attentive dad, loving husband and ever-hopeful Mariners fan.